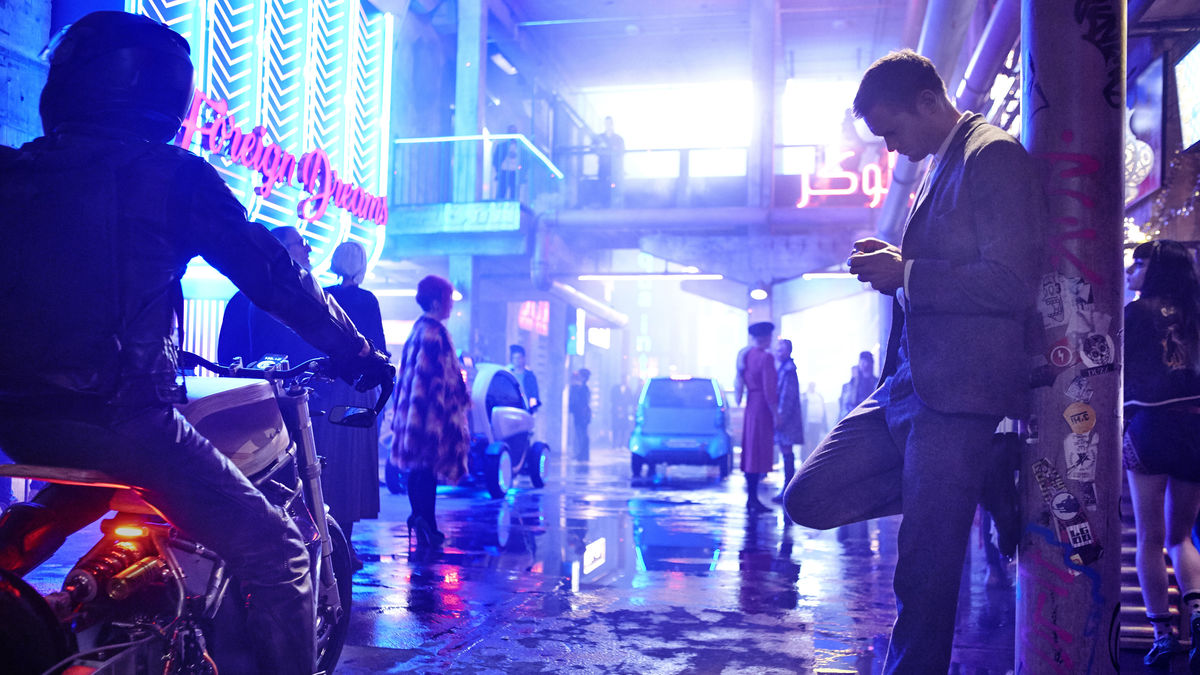 Directed by Duncan Jones, David Bowie’s son, Mute should be the kind of movie nestling somewhere near the top of the 400+ science fiction films on my list. In fact, Jones already directed one quarter of the titles scoring a perfect 10 ranking (as of late 2019), being the creative genius behind both the excellent Moon and the entertaining Source Code. He later went on to direct the rather poor fantasy wankfest Warcraft, which is neither a sci fi or a good movie. That should have been a sign going into Mute, which is also, sadly, a bit shit.

The premise certainly has legs, as does the setting. The Amish-raised Leo experiences a nasty injury as a child that renders him unable to speak. His mother resists medical attention on religious grounds and so Leo is still without a voice as an adult living in a futuristic vision of Berlin in 2035. Working as a barman in a seedy gang-run nightclub, he begins dating a mysterious coworker called Naadirah. Their romance is intense, but she soon reveals she has to leave for unexplained reasons. The core substance of the movie thereafter is a Taken-inspired romp through neo-noir futuristic Berlin as Leo violently conjectures his way closer to her whereabouts.

There are side-stories and sub-plots, the primary of which focuses on a rogue doctor (bizarrely played by Paul Rudd) performing a heady blend of torture and surgery on behalf of a local crime empire. These threads eventually combine into an explosive final act, but unfortunately the execution of Mute is all over the place. The pacing suffers from far too much bloat in the script, and while some scenes are brilliant in isolation – especially one in which sees Dominic Monoghan play a sex-crazed Geisha – most of them are thrown together in an incoherent and clunky mess. Jones desperately needs a stricter editor and the content delivery of Mute’s meandering script does not justify the 2hr+ runtime.

I mentioned the setting too. It’s among the best that can be found in the genre at times, drawing from Dark City and Blade Runner to create the atmospherically smoky underbelly of a futuristic Berlin. Ignore that it’s set in the ridiculously near 2035, and it’s somewhat believable. Problematically, it’s often let down by other strange anachronisms, like the presence of €50 notes, rampant 90s-era sexism and oddly dated-looking technologies.

Ultimately, there’s lots to like about Mute, but much like Tarantino movies it severely lacks a sharp enough supervisor to focus the ideas into a tighter, more coherent film. There is sloppiness and bloat found in almost every corner, and sadly what could have been a gripping and original take on an established set of ideas instead becomes a confusing, lengthy, familiar revenge drama that fails to make the most of any of its more interesting ideas.

Mute
An authentic and well-executed future vision of BerlinVisually, cyberpunk has rarely been brought to life as well as thisThere are some standout and memorable set-pieces amongst the mess
It's hard to keep track of the story, and it constantly meanders all over the placeThere's a desperate need for a tighter edit than the 2hr+ final releaseNone of the main cast deliver a particularly convincing or emotionally engaging performance
5Overall Score